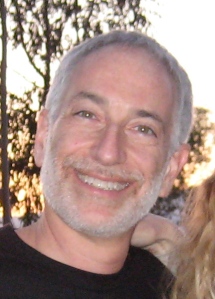 David has taught and coached writing as a creative and spiritual pursuit for nearly 20 years in the U.S. and Canada, guiding writers and non-writers alike to connect with their innate wisdom, open to their creative power and express themselves with ease. Author of two award-winning books, The Voice of the Muse: Answering the Call to Write and The MoonQuest: A True Fantasy, Mark David is also a popular speaker on topics related to creativity and spirituality, host of radio’s The Muse & You with Mark David Gerson and a regular featured guest on Unity.fm’s Spiritual Coaching radio program.

For more information about Mark David and his books, or to sign up for his email list, visit www.markdavidgerson.com .

TSC: How do you define ‘inspiration’ for yourself?

MDG: Inspiration is that spark of creative fire that fuels not only my writing but my life. It’s that aha moment in which a bolt of clarity suggests a project, a direction….sometimes even just a word or a step. Like a flash of lightning, it’s that momentary illumination that reveals just enough information to get me going or, if I’m already going, to keep me going. It’s not the whole picture, or the whole story…or even the whole scene. It’s just the minimum required to ignite my imagination and my faith.

What inspires me? I think life is what inspires me. At the same time, I enjoy living in inspiring places and have lived in many. Although I’m about to move to Los Angeles, I’ve spent the past several years living in the mountain foothills of Albuquerque, New Mexico. Being able to walk in those natural areas has been very inspiring to me. It has grounded me and opened my heart. I think that anything that opens our hearts is a potential source for inspiration, and I’m sure the ocean will pick up where these mountains have left off.

TSC: What do you think first inspired you to become a writer/artist?  Can you identify a moment or experience or influence that turned you in that direction? And where did it lead you?

MDG: When I was in school, I hated writing….anything creative. What I see now is that I was afraid. I was trying to avoid anything that involved the potential for judgment, that didn’t exist in that fuzzy realmbetween black and white. As a result, I gravitated towards math, because if I somehow recognized that if I got the right answer, I couldn’t be judged. 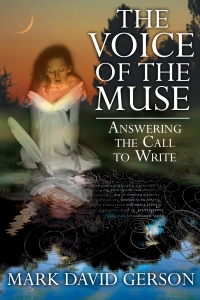 Apparently, though, my Muse had different plans for me and had marked me as a writer from day one. I just had to be eased, unknowingly, into the process.  It began in high school, when I somehow got talked into doing publicity for a high school musical production and had to learn to write press    releases. From that safe (because it was formulaic) place, I began to do more publicity and PR work, which led me into some journalistic work and a surprisingly lengthy stint as a full-time freelance writer and editor. Each of these steps propelled me to the Point of No Return: a creative writing workshop that an editing colleague persuaded me to take, against my better judgment, in the early ‘90s in Toronto.

That workshop was a life-changing experience, a nurturing, supportive environment that belied all my fears and beliefs about writing classes. The experience not only sparked a creative awakening but also a spiritual awakening. It also turned out to be my gateway into teaching about writing and creativity and into coaching writers.

TSC: What is your most ‘inspired’ work?  Why?

MDG: I suspect most of my readers would say it’s The Voice of the Muse: Answering the Call to Write, my book about writing. But for me, it’s my novel, The MoonQuest, probably because it’s a powerful metaphor for my own journey through and past my creative blocks.

The story, about a mythical land where stories are banned and storytellers are put to death, begins with the main 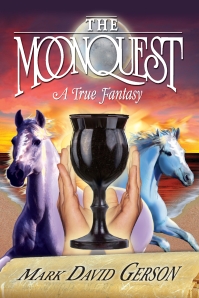 character as an old man,    pushed by a “dreamwalker” to write the story of his MoonQuest, the odyssey that restored story and vision to the land and light to a darkened moon. So often, when I give readings from that prologue and encounter his resistance to his stories, I’m reminded of my own. And so often, it moves me so deeply that it’s difficult not to cry.

I didn’t know I was writing my own story when I wrote The MoonQuest. Frankly, I didn’t know what I was writing when that story was coming out of me! In fact, I knew nothing at all about the story when I began…or, rather, when it began me. That it takes a profoundly personal story and turns it into something universal — and that it does it in a way that transcended my conscious awareness as I was doing it—still moves and humbles me.

MDG: Given the title and cover of my writing book, I’d better be careful how I answer this one! Seriously, despite the book’s cover, I don’t see my Muse in human-like form. Rather, I see it as an energetic force, a free-flowing river of creativity that’s always available to me.

As long as we’re in a place of surrender to that creative source that is our Muse, it will always speak. And as long as we surrender to all that it would have us write, we will never be be blocked.  I rarely engage in pre-writing rituals anymore, though I used to meditate before beginning — not to call in the Muse, but to put myself in a more receptive state for its words and stories. These days, I just sit down with some gentle, ambient music and begin.

TSC: What is your take on the notion that any artistic creative work is more about perspiration than inspiration?

MDG: Honestly? I think it’s bullshit! Of course, unless we’re writing there is no output. But the notion of perspiration suggests heavy labor. And although writing can be difficult at times, that difficulty is all about our resistance to the story our Muse would have us tell.

The more we surrender, the more access we have to inspiration and the less laborious is the process. At its best, creativity is about playfulness not hard labor. The more playful we can be, the less seriously we take ourselves and the process, the easier it always is.

TSC: What do you think is the most problematic misconception about inspiration?

MDG: That we have to do something to access it. Inspiration is around us in any and every moment we’re open to it. There’s no switch to flick, no Muse to invoke. When our hearts are open to our lives and to the world around us, inspiration pours in. Then it’s our job to listen, to surrender, to trust the process…and to write it all down.

TSC: List a few tools or practices or methods that work reliably for you to get you in the mood to create.

MDG: Rather than shifting into a zone, I do my imperfectly human best to live in the zone — to keep my heart and mind open, to live in a place of trust and surrender in all aspects of my life, not just my writing life. When I’m feeling stuck or shut down, a walk in nature will usually shift my energy and my mood — again, not just in my writing, but in my life.

For me, life and creativity are inextricably linked. If I’m living from a place of passion and faith, there’s less I need to do to switch gears. And if I’m experiencing writing issues, I need to look at my life, where the underlying causes of those issues most often reside.

TSC: What are you currently feeling inspired to do?

MDG: Where do I begin!? I could talk about my works in progress (a sequel to The MoonQuest and a just-started memoir). But in truth, inspiration for me is less about specific projects than it is about a way of life. So I would say that I feel inspired to trust more, surrender more fully and life more heartfully — in my life as well as in my writing.