An idea is salvation by imagination.
—Frank Lloyd Wright

Writers and other artists are often asked about the inspiration for their work.  Some of us—myself included—can find it a difficult topic to address in any way that makes much sense.  Some of us don’t even really put all that much stock in the notion, believing instead that it’s ‘perspiration not inspiration’ that carries the day, or at least, reliably fills the page or the canvas.

Nonetheless it’s a topic that continues to inspire inquiry and so I am going to be inviting those who are finding their own successful mix of effort and inspiration to share their unique perspective on the subject with The Shower Channel in the coming weeks.  The purpose of these interviews is to dialogue either seriously or humorously about the mystery and magic of inspiration—and to offer any insights that would be useful to others trying to find or better employ their own muse or shift into a more productive creative space.

I’m including visual artists and musicians as well as writers in this invitation, so if you or anyone you know might be interested, please contact me at dan@dansville.net and I will provide details. Each guest writer/artist/musician will also be invited to plug his or her published or pending work. 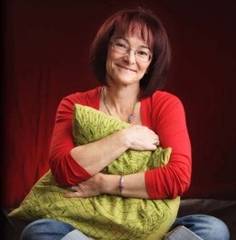 First up is my dear friend and creative partner, artist Cher Odum, whose beautifully inspired and playfully innocent images inspire me to co-create with her our exclusive, original line of greeting card art–and with whom I am currently creating an illustrated children’s book, a set of affirmations cards, and who knows what else!

TSC. How do you define ‘inspiration’ for yourself?

CO: Inspiration is an idea, a vision, a communication from my Higher Self or my spririt guides.  Sometimes it comes to me after I’ve specifically asked.  Other times it comes as if out of the blue, through a dream or during conversation with a friend.  Inspiration is a thought that comes to mind, followed by an urgency to paint it.  I know it’s inspired when I can flow with the idea, and there are no struggles to create.

TSC:  What do you think first inspired you to become an artist?  Can you identify a moment or experience or influence that turned you in that direction?

CO: I can’t remember a time I didn’t think of myself as an artist.  When I was four years old I spent hours finger painting what I considered the most glorious creations.  Of course, I was encouraged by my grandparents, who lead me to believe that they also thought my creations were glorious and worthy of gracing the walls of their home, and the front of the refridgerator.  I felt that any blank surface should have been adorned with my colorful artwork, and I spent many hours doing chalk drawings on neighbors’  driveways and sidewalks, and with crayon on the lovely white walls in the home of my grandparents.  I never understood why I needed to wash them away.

TSC: Describe the ‘inspired’ you.  What does he/she look or feel like?

CO: My inspired self glows with joy and contentment.  She feels alive and happy, and very content and complete.  She dances and sings.  She is as free as the wind.

TSC: What is your most ‘inspired’ work?  Why?

CO: I’d have to say my most inspired work would be the illustrations for a children’s book Dan and I have spent the past year working on together.  I’ve never attempted anything like it, and had no clue where to start or how I was going to bring Dan’s delightful characters to life.  There were times I was a little overwhelmed by how I was going to create a certain character, and almost convinced myself I just couldn’t do it.  Just as I was ready to throw in the towel an idea would just pop into my mind while I was driving, taking a shower or in a dream.  When I followed through and painted the images I was given, it just so happened to be on the same line as what Dan was thinking of for that character.

CO: I always call on my spirit guides or my Higher Self.  I light candles, burn incense and ask my guides to assist me . . . to guide my hand as I paint.  Other times an idea was offered to me in a dream and I head right to my art table and begin drawing first thing in the morning.  Other times I go for a walk in the woods, or a drive to the coast.  Some of my best ideas have come to me during a long drive through the countryside.

TSC What is your take on the notion that any creative work is more about perspiration than inspiration?

CO: I sometimes make things harder than they need to be, and put a lot of pressure on myself.  When I’m not going

with the flow of my inspired creativity, and trying too hard, I make a lot of work for myself, and end up throwing it away and starting over.  I’ve learned it’s so much easier when I wait for the inspiration and not try to force anything.  After a creative surge I always slip into a lull, which I often refer to as a ‘funk.’  I’ve learned that the funk is just a period of rest, to prepare me for the next inspired creative surge forward.

TSC  What do you think is the most common—or problematic—myth or misconception about inspiration?

CO: That it’s easy to come by, or once inspired, always inspired.  Some people don’t understand how you can be flowing with inspiration one minute, and wondering where it went the next.  In fact, I sometimes wonder about that myself.

TSC  What is the most ‘inspired’ work you’ve come across so far?

CO: The most ‘inspired’ work I’ve personally come across so far is the delightful children’s book Dan is writing.  I have

no doubt that when it’s published everyone who reads it will feel the inspired energy that went into the creation of all the colorful characters in the book, and the unfolding story of the main character.

TSC  List a few tools or practices or methods that work reliably for you to get you in the mood to create.  How do you shift into your ‘zone’?

CO: Dancing or Yoga, both to free my blocked energy.  Playing with my grandchildren, and oberving the ease with which children creatively flow, and how easily they’re able to shift gears.  I need to remind myself to not be so serious, but to be almost childlike in my creative process, and enjoy the flow with more feeling and less thinking, like children do.

TSC  What are you currently feeling inspired to do?

CO: Currently I’m waiting to feel inspired again.  I just finished a series of paintings and the illustrations for Dan’s children’s book, leaving me in that funkish state . . . or a lull, the rest period before the next inspired and creative surge forward.  I’m hoping the inspiration isn’t long in coming!